A long while back, I wrote a piece about Detroit hip hop ambassador [DJ] House Shoes. It seems that one of Detroit’s greatest champions of its music may finally be building some serious steam as he has had two (2) releases in 2010 with threats of more. Many of you might not understand why I would even make note of this, but I have been following Shoes’ career since 2000 when I purchased a CD by Detroit hip hop artist Paradime. Before I even knew of his future endeavors, I was intrigued by the fact there was a producer in Detroit by the name of House Shoes. Little did I know, when I finally came back home from my stint in college that he would be well on his way to becoming one of the most respected figures I would come to know personally.

Today, I want to share Shoes’ two recent projects. Both of which contain material that I have been sitting on for quite some time and I glad to see it finally be released for public consumption. The first I will share is his latest vinyl project released on All City Dublin, which features two instrumentals by House Shoes and three by Metro Detroit expatriate Jordan Rockswell. The project is the fourth installment of a series that features beats from artists that live in Los Angeles. It is available for sale now overseas. You can preview all of the songs on the site as well.

The second project is another limited vinyl release that was released by Stones Throw Records, which you might recall is one of our favorite record labels. Unfortunately, this release is sold-out, but I will say the packaging is wonderful as I have two (2) copies in my possession.

This is what I am playing a lot lately. You can still buy the MP3s for the Stones Throw project (click the image on the left to buy) and if you got worldly pockets, you can get the other project shipped to you from the Netherlands. As a music fan and supporter of quality work, I will be buying it; even though, I already have the instrumentals on my harddrive.

If you want some free music offerings, check out the Shoes’ House podcast. Shoes has one of the best ears for music around and his taste is vast, much like mine. Have at it. You will be glad you did. Hey, since you’re hear getting info on House Shoes’ latest mix, The King James Version Chapter On, go ahead and check out House Shoes’ Fave Five on The Smoking Section blog. Written by LC Weber, it has a wonderful introduction that gives you a little bit more insight behind the man that has Detroit hip hop on his back.

I have been focusing on myself lately, trying to get ready for the “new me” in the new year of two thousand nine. In the last week or so, I have been getting some AWESOME music from respected DJ friends of mine. I figure this week I should give them their propers (read: proper respects) and do some features on them, because these guys are not just excellent tastemakers and music selectors but they are beatdiggin’ behemoths too. You’ll come to understand as the posts drop.

Now these features are not being done in any hierarchical order. I am doing them based on when I got the music, so with that said… let’s get to it!

First, I want to highlight a new mix in store for the masses called The King James Version. 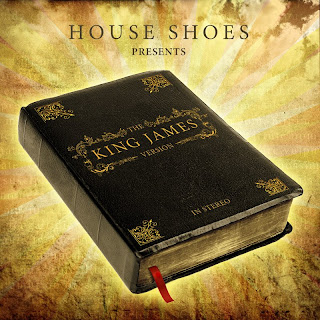 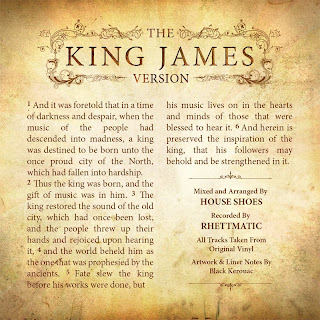 It is a mix of original tracks used by James “Jay Dee –> J Dilla” Yancey to make his beats. The mix was created by none other than Detroit’s worldwide hip hop ambassador – DJ House Shoes.

If you do not know about Shoes yet, then see this as a quick introduction to him. House Shoes has a lot of claims to his fame. He was responsible for releasing the highly sought-after Jay Dee Unreleased EP and the classic “Dedication to the Suckers” 12″ by Phat Kat – both on House Shoes Records. Back when being a DJ really meant something, House Shoes had the distinction of breaking many of the notable Detroit hip hop artists you may know today. He produced tracks for a young eLZhi and a drunken Irishmen named Paradime. Honestly, if Shoes had equity in the house he built for Detroit hip hop, he would be able to buy the Renaissance Center off of General Motors right now. Alas, my friend has to grind just like the rest of us; good thing he’s a talented bloke!

The King James Version… man, I just finished listening to it and I stay amazed by the diversity in Dilla’s sample selection. He IS the vanguard when it comes to finding the perfect sound to evoke an emotion in hip hop production. There is no doubt about it. And like my man House Shoes probably would proffer if you would want to disagree, you can get punched in the face for being an idiot. I do not really condone violence though. I just want you to understand how serious Dilla’s work really was.

In the capacity that I have the mix, I know that the mix was recorded at Rhettmatic of World Famous Beat Junkies’ place. All the songs are recorded from vinyl – no MP3 stuff – so before you jump and try to compile your own mix, forget about it. You just cannot possibly have the collection. House Shoes is showing off in a major way. That is not to say all the records are rare or you cannot get them, but you first must find the samples first. Then the time and money it would take to procure many of these pieces would take YEARS. For Shoes, about half of these were his own finds. A huge grip came from the GOAT himself and the rest of the spotted samples were from others, but House Shoes owns all the records.

I am going to end this with a track produced by House Shoes with the most recent eMCee from Detroit that he co-signed for – Danny Brown.